Hello There! Thank you for coming to visit us today 🙂

You are in for a treat today, not only is it double the inspiration as always on our ‘Wonderful Wednesdays’ but today Kim and Lisa each have 2 amazing cards to share with you!

Today of course is Visible Image Wednesday and I have another card to show you made for the recent Trade show at the NEC.

Is spring here ? Or not? Can anyone tell me, this is today’s posable question folks lol. Last week it was so warm the heating went off the duvets got changed etc etc… the last few days the heating went back on and it feels like we have gotten cold again lol! Is it just me or is anyone else hoping that the recent warm spell was spring starting to smile upon us… and and and my neighbour has finally cut the top of their trees after 5 years with absolutely no light in the garden hardly at all so this summer there will be sunshine….. we hope haha.Anyway enough of this silliness hehe.

So here is today’s card It is certainly a little different isn’t it?
We were kinda challenged into stepping out of our comfort zone in a way by using a whats considered to be a backing stamp and  a sentiment to make up a card.
Well I immediately thought this was a fabulous idea these stamps are such such such good value and I know we all have a budget to follow so why not take a stamp, thought of in one way and turn it on its head. This of course is the card that I started with and the circle stamp is called Orbital , there are two different ones in the pack and I think I showed the other recently which has several circles rather than this one.
I thought this one would be absolutely perfect for those of us who enjoy mixed media and Journalling also as this kinda circle is so popular also I don’t know if any of you use the Gelli plate but stamps like this are fab to mark out on your base of acrylic paint before picking up a print so you could have the first print as patterns of circles and build up til you were say stamping an undersea image and the circle became a coral reef etc. Just thoughts. 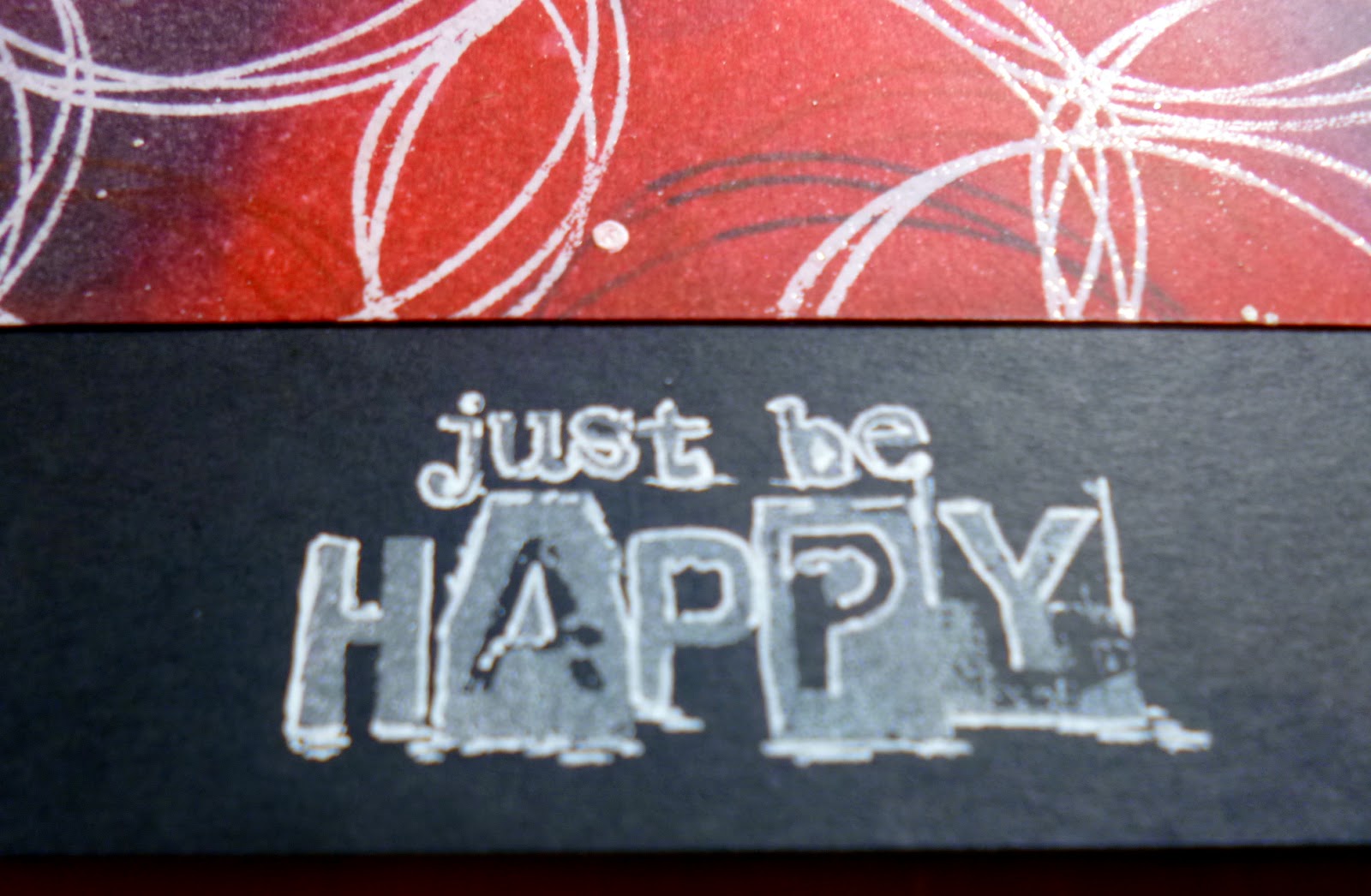 Back to today’s card, This was the sentiment I chose from the last launch sentimentally yours and the Be Happy set which is stamped in of course white ink and then I went over and highlight in a white gelli pen and added highlights on the shadows too to ground it. Another full image so I can give you a quick guide how I made this one. So to start I took a piece of white card and wiped over with an anti static pad. I then stamped the first layer of circles in Versamark ink and used clear embossing powder which I heat set. I then took some Black soot Distress Ink and also some Barn door Ink and a little of the dusty concord to give a hint of purple and lighten the black just a little.  I coloured in my usual way with two layers of ink in the usual position that I find optimal to shading which I am sure you all know by now. lol

I then took those same inks and tone on tone stamped with the same stamp in the coloured area so red on red , black on black and dried this off with the heat gun.  I then took my water spray and flicked water and spritzed it some big splodges some small and dabbed the ink away with a paper towel.

As we were not to use more stamps I still wanted some depth to come in so I also took an old white chalk pen and flicked it at the card and added random splodges so in person there are still many layers to look at in this one. I then mounted that onto a piece of black card the same width and wrapped a little grey ribbon around the join.  I also added a double white mat with foam in between to give it its finished platform as it were. I added a bow and a little charm to its centre. 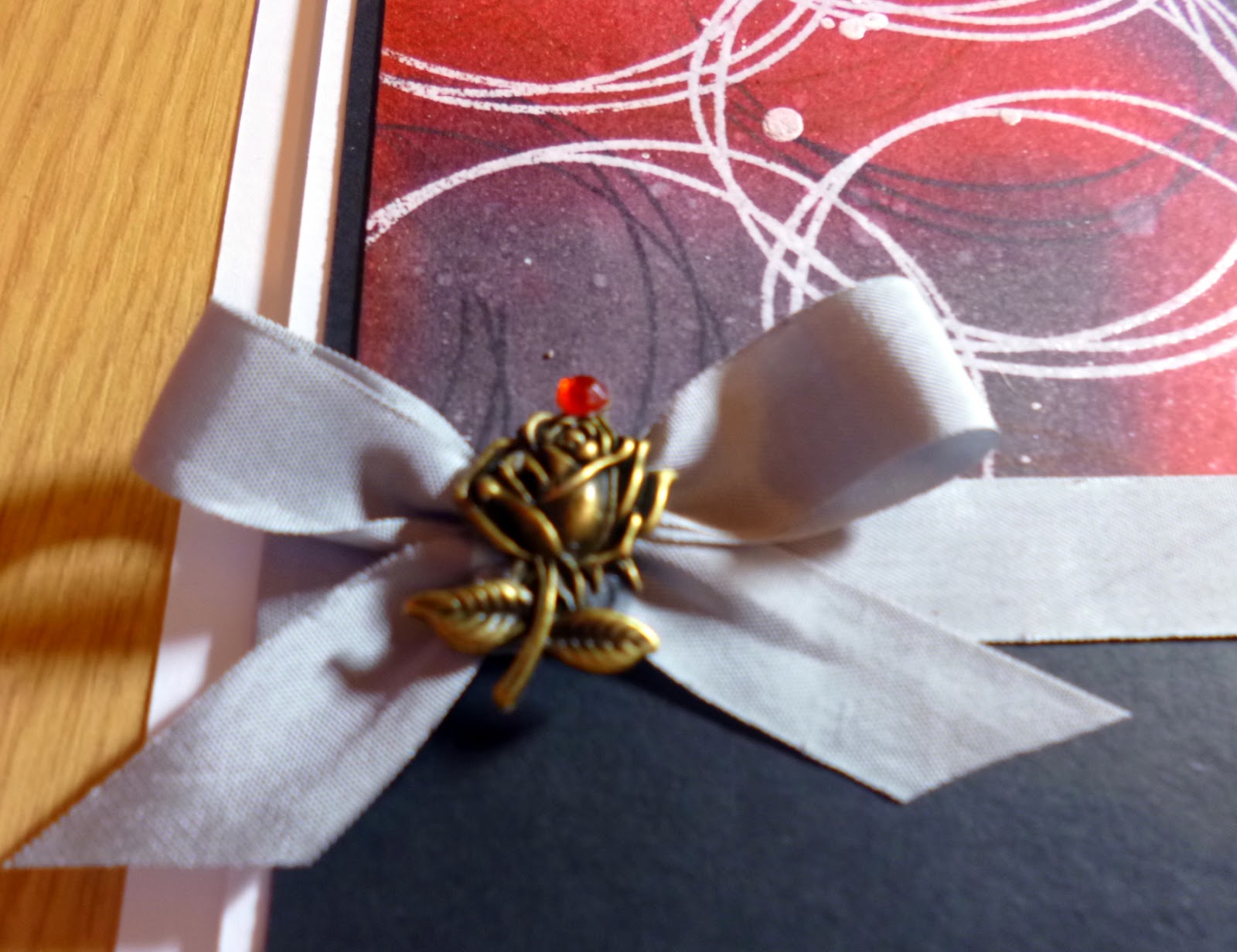 Here is the finished bow and a little rose charm with a red stone in the little bale at the top , I used some pinflair glue here to hold it to the bow as that stuff dries and you will never get it off which is what you want especially when these cards are on display a lot.  So I finished it with little squares of gems in red in each corner just for something different. 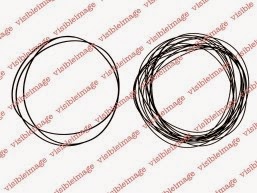 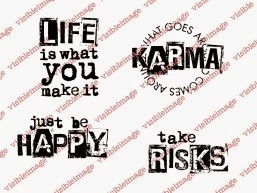 So I have a little bonus card for this week also as It was a fairly quick one and used just a couple of stamps and a little tim Holtz paper and inks too. This one features a brilliant stamp set also from the recent launches called  ‘Play it Loud’ and also ‘Soul Music’ I took a smallish piece of off white beigy card and stamped with Brown momento ink the music notes stampset called Soul Music in just a couple of places top and bottom of the card.  I also stamped the sentiment from the set top left and the gentleman with his Trumpet bottom right,
I used some vintage Photo distress ink and went round the edges of the paper and used a brown spritz to splatter the paper and some sepia ink and white ink to dot it too. I also filled in the pattern on the player with my white gelli pen to make him stand out.
Since I stamped in Momento I took an alcohol marker from Promarker in a very light grey and went round the main image and the music notes  I added shadows and also to a few main splodges etc  to lift things off the page , I grounded the main image also with a shadow by his feet and added some sparkle to the hat, shoes and trumpet in gold.
The background I put together using random small pieces of paper I thought was a little manly and musicy (new words , sorry guys lol) and piece them together on a black mat and added a ivory ribbon in satin to the first layer too. I gave the bottom layer a couple of mats in dark colours and added a bow to the left with a tiny trumpet I had in my stash to the centre which i thought fitted very well.
I drew some faux stitching by hand in black pen round the paper and a few gems in the corners and on the ribbon finished off this little I’d say intermediate level to make card. 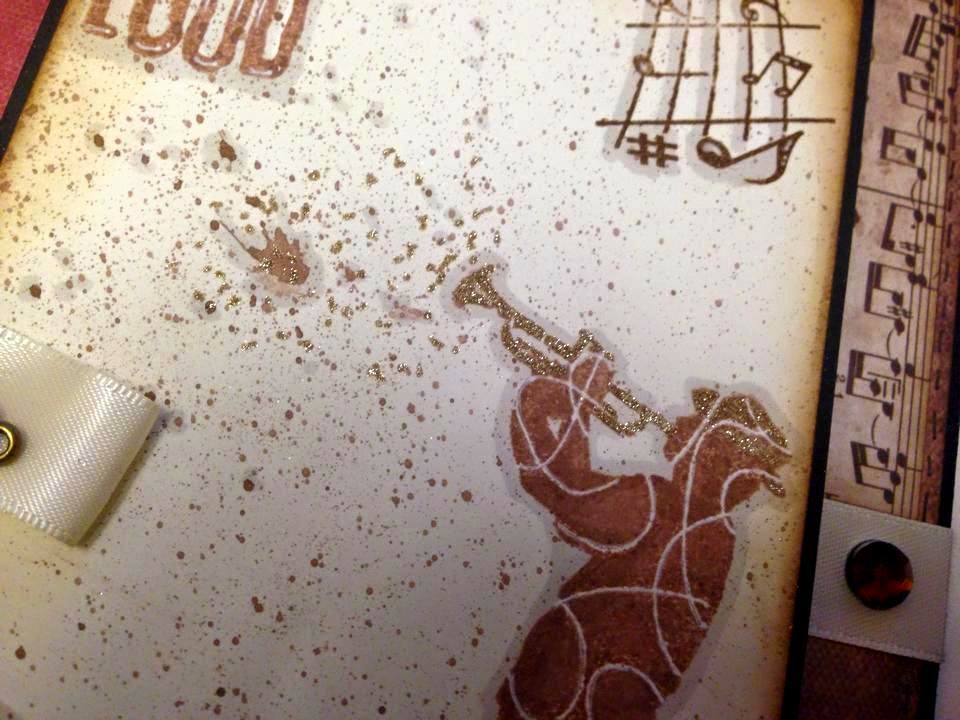 A close up on the shadow placement around the main features I wanted to come forward. 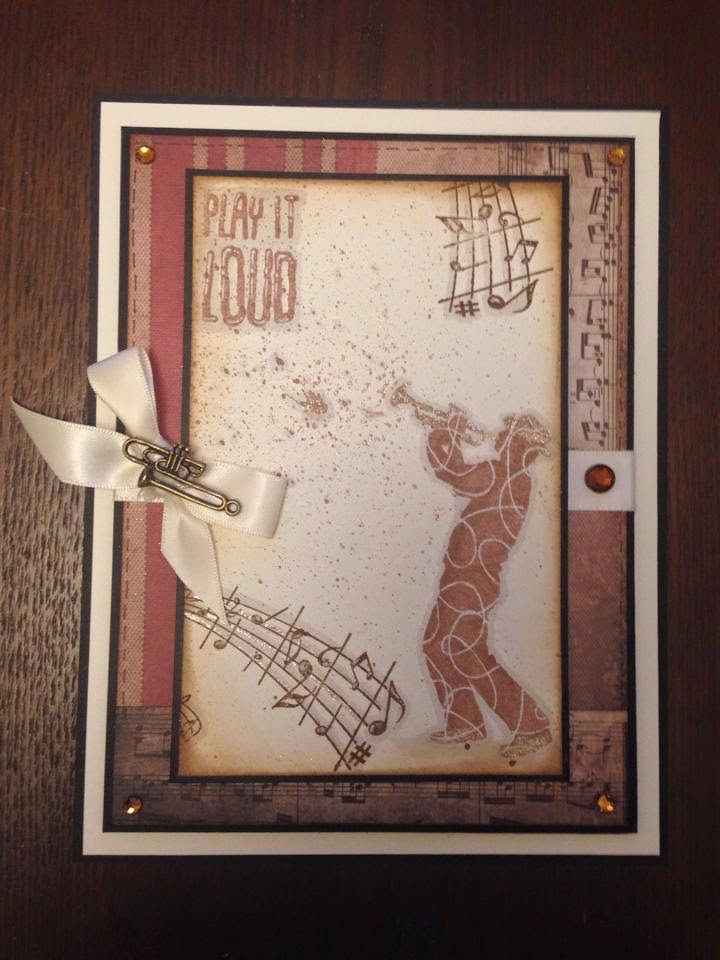 And the main image again , I like to think it looks like it was back in the era of American Jazz and a little Vintage inspired for this guy.
The two stamp sets I used on this one were. 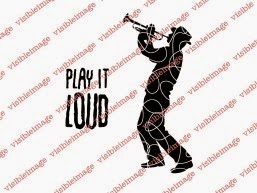 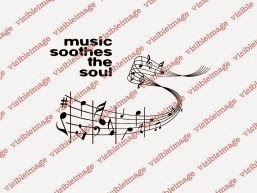 So this was a great card for a guy or anyone who isn’t into flowers and girly stuff , also maybe someone in a production or play, My son did Bugsy Malone when he was at school and this would have been a great card to wish him luck I think.

I just added it as a bonus to today’s post rather than a full write up with lots of tutorial pics so I hope you like it.

I hope everyone had a wonderful mothers day over the weekend or had wonderful thoughts of the ones we love who are sadly now passed . I had a lovely Saturday with my daughter in London, and a nice long chat with my boy on the phone Sunday, and so those moments are the ones I treasure so very much.

Huge hugs to you all
with thanks
Kim
XXXX 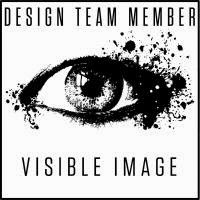 Aren’t they both fabulous! The white orbital circles look fantastic against Kim’s red background. The trumpet player looks superb with those touches of gold. You will find more of Kim’s amazing work over on her blog.

Have a good day.